The other day one of the daily processes that we have to do as a part of our IT Operations failed spectacularly. You see we have to upload a csv file to a transaction processing system so that it could maintain customer information just in case our primary system goes offline.  The problem that we had was that when we tried to upload the file to this system it failed because there were duplicate records already loaded into the database. By the way the systems are dissimilar systems and so some form of replication or log shipping would not have worked in this case.


This is something that we had seen before and to fix this problem we would run a query against the database to find the duplicate records and then delete the one or two duplicate lines from the file. However this time when we ran the query instead of getting one or two records it returned a few hundred records. This certainly was not good news for us, because there was no way that we could delete a few hundred duplicate lines from the file in time to complete the file upload. Or was there?


We decided that our best option at that point was to find away to automate the deletion of the duplicate lines from the source file and to do that we turned to Powershell. A quick google and we came across this posting on the StackOverflow website that demonstrated how to delete duplicate lines present in one csv file from another csv file. We created our script based on the answer provided by Graimer.

Long story short we were able to delete the duplicate lines from the source file quite easily and then we were able to successfully upload the cleaned file into our transaction processing system. PHEW! Powershell to the rescue once again. However the story does not end there because we knew that we could face this problem again and we decided to turn the script into a reusable tool that could be used by any member of our team, and this post describes that process.


Essentially what we want to do is to convert these few lines of Powershell script in Figure 1 into a full fledged GUI tool in Figure 2.

Figure 1: The script used to remove rows present in one cvs file from another csv file. 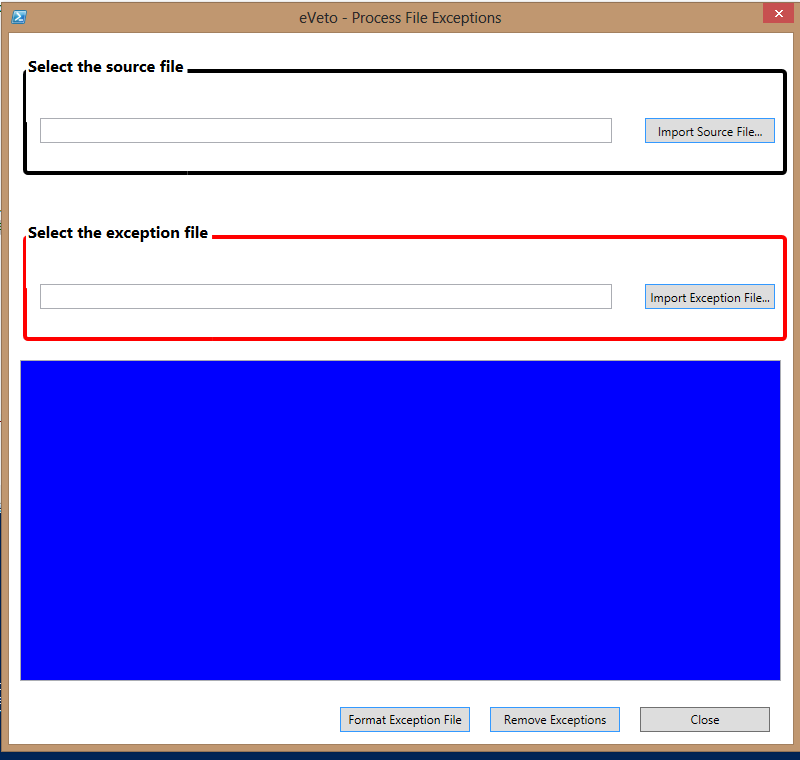 To move from the basic script to the GUI based tool we must first define the specifications of the tool:

The UI tool consist of three Powershell scripts and these are:


The eVeto tool can be downloaded from this link.


The UI will be based on the Windows Presentation Foundation (WPF) technology. To design the interface we will use the freely downloadable Microsoft Visual Studio Express 2012 for the Windows Desktop. Visual Studio Express 2012 will generate an XAML file named MainWindow.xaml for the UI that we create. This XAML file is actually based on XML and we will use the Get-Content cmdlet to read the file into Powershell as an XML data object. The next thing that we will do is to create a System.XML.XMLNodeReader object to access the XML object that was previously created. We will then use the Load method of the Windows.Markup.XAMLReader to get the root of the XAML file. We save the reference to the root of the XAML file in a shared hashtable. The next thing that we do is to loop through the XML object and save a reference to the named controls in the hashtable as described in this post. This is shown in Figure 3. 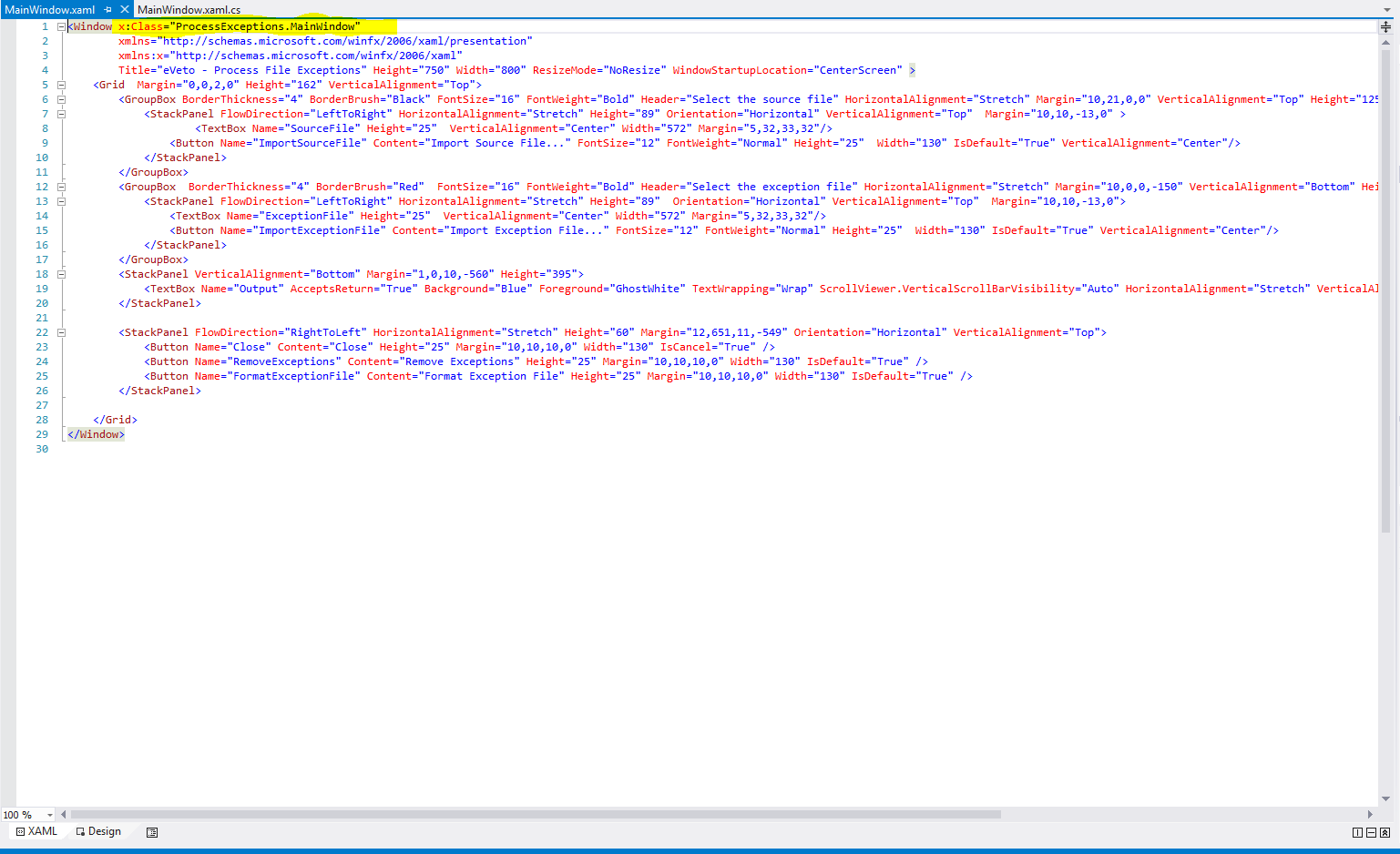 Now that we have a reference to the named controls in the hashtable. We will bind the Click Event of the buttons to functions that we import from the Invoke-evEtoUIEbvents.psm1 module. The format for binding to a WPF control event is quite easy and it takes the form ControlName.Add_EvenetName ({ script block }). So to tie Click Event of the button named ImportSourceFile to the function Invoke-ImportSourceFile we would use the following Powershell code:

The complete code listing for binding the WPF UI Events to the functions in the Invoke-eVetoUIEvents.psm1 module is shown in Figure 6.


After we have bound the button Click Events to the Powershell functions we will display the WPF UI by calling the ShowDialog method of the Window.

This happens because the thread that creates the WPF UI elements owns the elements and other elements cannot interact with the WPF UI elements directly. This is know as thread affinity. To get around this problem we will use the Dispatcher and the Invoke method to update the WPF UI. This problem has been blogged about and an example of this can be found here.

Figure 7: Sample of the Exception File

Figure 8: Sample of the Source File


In looking at the format of the source file we realized that we could use a simple string replace to remove the NULL and the 00:00:00.000 from the exception file to match the source file. However the formatting of the date would prove to be a bit trickier, but it was a problem that a regular expression could solve. The regular expression that we came up with was “(\d{4})(-)(\d{2})(-)(\d{2})”. What this means is to match any part of a string that has 4 digits, then a hyphen, then 2 digits, then a hyphen, then 2 digits. If we are doing a regular expression replace in Powershell then the captured patterns are stored in special variables $1, $2. $3, etc. We can use these special variables in the regular expression replace to get the date formatted in the way that we want and in this case the date format 20130704 would be represented by the variables $1$3$5. A string replace of the hyphens in the date could have worked as well, but the regular expression is much cooler.


We wanted to have a generic solution that we could use to format other files for other scenarios, and so we decided to use an XML based file to hold the formatting instructions as shown in Figure 9.

The other thing that we did was to always check that the exception file was in the correct format before we attempted to delete the duplicates from the source file.

Figure 11: Checking that the exception file is correctly formatted


From Basic Script to Reusable Tool


The code listing for the Invoke-RemoveExceptions is shown in Figure 12.


The Invoke-RemoveExceptions function is wrapped in a try, catch block so that we can catch any exceptions that occur and update the eVeto UI. In addition to this we use the -ErrorAction Stop parameter with the Get-Content and the Add-Content cmdlets. This is because the try, catch block will not trap the non-terminating errors which are generated by these cmdlets, and the only way to catch these errors is by treating them as a terminating error.

In the UI tool we use a textbox named Output to display the results of an action or error messages. This textbox is updated by a function named Write-PSOutput. The update to the textbox happens by using the Dispatcher, and this allows us to access the textbox from the Powershell process.

Turning a basic script into a UI tool is a pretty involved process, but the benefits of doing so far outweighs the time that it takes to do so. In our case we now have a tool that any of our IT Operational staff can use to quickly create a cleaned source file that we can upload into our transaction processing system. In addition to that we have made the tool generic enough to be used in other scenarios that would require deleting lines from a csv file.
Posted by Nigel at 15:48

Getting Started with foreScript I have been using Powershell for some time now and I think that it is a great addition to the toolset o...